Psalms 119:71
It is good for me that I have been afflicted; that I might learn thy statutes. 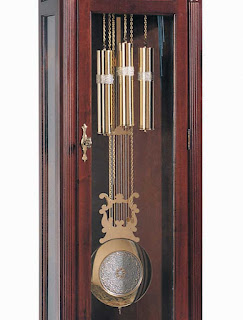 The useful chime of a grandfather clock is a delightful gesture in our day.  This novelty to us, however, was more as a staple to those in yesteryear.  Its purpose was clear, keep time and testify to the unending drive towards the future.  The greatest craftsmen would mingle his skills as a clock maker with the accomplished touch of an artist to bring forth these beautiful and functional delicacies.  They are often forgotten in our day, and as such, so was the case with a young lady who inherited her grandfathers antique timekeeper.  Upon inspection she found to her surprise so many parts and pieces which included as the greatest of them 3 considerable weights.

"I will relieve you of these, for you have carried these burdens far too long."  She said.  After this,
the heirloom was once again settled in a family home.  It became the central conversational piece in her humble God fearing abode.  All was restored except the weights, and consequently, the faithful chime of every passing hour.  A technician was called to service the clock, and his expertise revealed a simple problem.  There were no weights.  Without the weights, the clock could not possibly function.  It was that burden which caused the clock to fulfill its intended purpose.
So is the case of God's people.  If He should remove every weight and burden we would stop our intended purpose.  It is the weight of affliction that keeps us so close to God.  Without it we would be but an empty shell, failing to chime out praise and the message of the Gospel.  Every person born shall have burdens.  The difference between  sinners and saints regarding how burdens are handled are immeasurable.  Weights pull sinners towards hell and drudgery, but as an opposite, they lift saints to higher grounds.  Every child of God that receives a burden is also dispatched an allotment of grace to bear that weight.  Then it is no longer he who bears it, but Christ.

Dear believer, when your distress comes, let it not push you away, but rather let it drive you to Christ. For when we are weak then we are strong.
Posted by Morgan Flagler at 9:30 PM

Have you found manna to feed your soul? Become a follower!